One Of The Family On An Independent Quest. 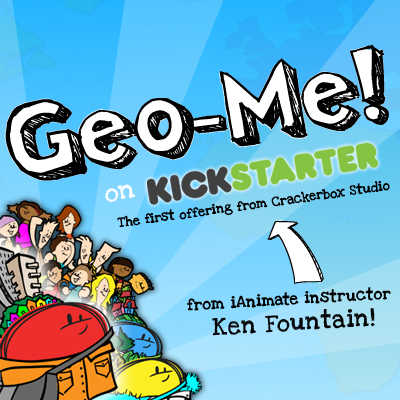 Former DreamWorks animator?!? Why in the heck would he leave the most utopian job ever?!?!?  Well, after contributing to an extensive list of titles at arguably one of the world’s largest animation studios, Ken decided to strike out on his own and follow a dream he couldn’t let go of; to create educational and inspirational animation like the “Schoolhouse Rock” of his childhood, as well as to combine his love for songwriting, animating and teaching.

Although he left Los Angeles and stationed himself in the rolling hills of Charlottesville VA (whaaa???), Ken is a true blue Chicago native. Ken made a living for a long time creating promotional artwork for large Chicago presences like House of Blues and Aware Records, as well as recording and touring with his Chicago bands, Birds at the End of the Road and Red Elephant.  Recruiting co-conspirators from his cadre of talented Chicago friends was the first thing on his mind.  The 4-man team of Ken Fountain (animation, songwriting), William Hayes (code), Scott Tallarida (music), and Brian Doherty (design) represent a wide array of creative disciplines and share a deep and storied history of creative all-night-ers.

So, what is “Geo-Me!”? Essentially, it’s an animated iPad app. While watching animated stories and singing along with the “Geo-Me!” characters, kids will be able to create Geo-Me’s of their own, explore the world map and learn about all the ways geographers measure and classify the globe.

The heart of the experience is the song “Where I Am”, which, through its many animated verses, introduces you to children from across the globe and gives you a little window in to how they live and love their lives.

(*side note: many of the stories in “Where I Am” were inspired by and based on interviews so generously given by some familiar iAnimate alumni!)  :)

Crackerbox says it like this: “The goal of “Geo-Me!” is to inspire curiosity, to entice the participant to take a wider look at the world we live in and compare and contrast geographies and demographies in a way that is entertaining and probably brand new. It can be a first opportunity to learn about the many big cities, rural villages, working croplands, frozen tundras, sprawling savannas, lush forests and other geographical features that provide a life for all of the different people on the planet.”

Bringing it to Kickstarter serves two functions; it allows Ken and Crackerbox to get this first creation out in the world, but it will also open the door for more. We plan to create a vast collection, covering multiple subjects; as well as employing talented artists, musicians, animators and technicians.

Maybe some day you could be a Crackerboxer? Hmmmm....

If you can, consider supporting them on Kickstarter: http://www.kickstarter.com/projects/crackerbox/geo-me, or just help spread the word for one of our iAnimate family!

To see more of what Ken and his cohorts have been up to, check out their production blog at http://crackerboxstudio.tumblr.com, or join them on Facebook at https://www.facebook.com/crackerboxstudio.